Coconuts are the most widely distributed crop in the Solomon Islands and form a key part of almost all farming systems in all provinces. Some 40,000 rural households produce coconuts for their consumption, to produce fuel and building materials, and to generate cash income.

Copra is the most important coconut product and is a vital source of cash income for rural households, especially those in the more remote areas.

The Coconut Sector Strategy estimates that total production in the Solomon Islands is about 370 million nuts of which around 70 million worth about SBD 140 million are consumed. Copra exports account for 150-200 million nuts worth some SBD 110-150 million depending on prices.

Despite their importance, there has been little investment in coconut production in recent decades. Coconuts are overwhelmingly a smallholder crop and former plantation production has declined to negligible amounts. Smallholder households use their income from coconuts to finance their basic needs and very little is re-invested in the crop, value-adding through by product utilization, or diversification into higher-value products.

Do you want to buy Copra from the Solomon Islands? 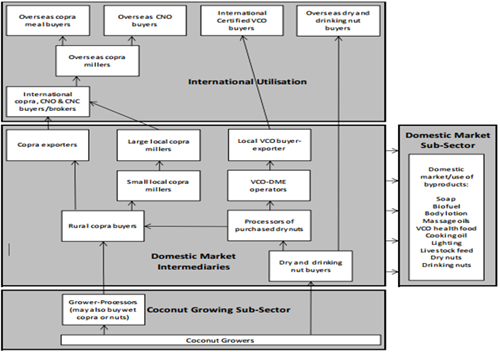 Currently, there are four major coconut-producing provinces in the Solomon Islands mainly Western Province, Central Province, Guadalcanal Province, and Choiseul Province that have produced an average of around 95% of total production followed by other provinces. Refer to figure 1.1 below:

Figure 1.2, also shows the copra export by volume from 2010 -2020, The Copra production peaked in the Solomon Islands is between 2010-2011 exporting around 35565mt, however, dropped drastically in the year 2019 -2020 due to low copra production and other factors such as the invasion of the  Rhinocerous beetle invading most of the coconut plantations in the region. Now that the Solomon Island Government (SIG) and other stakeholders along the coconut value chain have been continuously investing and supporting the coconut sector through the implementation of Coconut rehabilitation projects, research on new coconut varieties and strategies implemented to eradicate the deadly Rhinocerous Beetle are some positive indications in years to come the level of coconut production will gradually increase throughout the region.

Do you want to get involved in the buying, selling or exporting of cocoa beans? Need help finding a buyer or a supplier?

Copyright © 2014-2023 - Solomon Islands Chamber of Commerce and Industry. All Rights Reserved.
Fully managed and hosted on